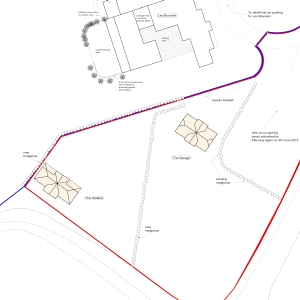 BCP Council (former Borough of Poole): Located to the north of Poole in an area of Green Belt, there is a hotel with two outbuildings, one a garage block with storage above and the other a former stable block.  Darryl Howells has secured planning permission for the conversion of the garage and stable buildings into two houses.  The drawings were prepared by Jon Harrison of Harriplan.

When first approached by the client regarding the proposal, using his extensive Local Planning Authority experience, Darryl highlighted three areas of concern that would be identified by the planning officer.

The first being the additional housing in the Green Belt.  Using the commentary of the National Planning Policy Framework to his advantage, Darryl successfully argued that the openness of the Green Belt would not be harmed by virtue that the buildings were already on site, and the paraphernalia associated with homes, such as garden equipment, outbuildings and traffic movements would not be significant to establish ongoing harm.

The second issue was the plot sizes.  In this area of Poole, the plot sizes tend to be substantial with houses isolated from their neighbours by distance,  landscape screening and tree line boundaries.  The proposed houses would be materially different on much smaller plots and significantly closer together.  Darryl argued that to deliver housing demand, the Council would need to adopt a flexible approach with policy, and that the development would incorporate some characteristics of the area, such as hedging on the boundaries.

The final issue was the relationship of the proposed houses to the existing hotel.  Darryl advised the client that a noise report would be needed that identified any issues arising from amplified music equipment that would be used during evening functions, weddings, etc.  The Noise report prepared by Impact Acoustic identified that there could be a problem but with the provisions of an acoustic screen and cessation of use of external spaces close to the proposed houses by a specific time, then the relationship between the houses and the hotel was acceptable.  The Council’s Planning Officer and Environmental Health Officer supported that conclusion.

The Council, having been satisfied on all three issues, granted planning consent for the two houses.

If you have unused buildings in the Green Belt and want to reuse them, for housing or other uses, then please get in touch with one of our consultants at Pure Town Planning.