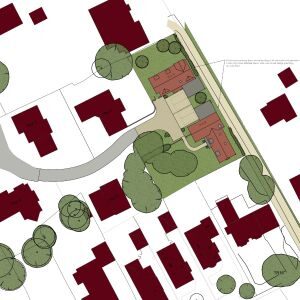 Following production of the plans, Darryl prepared his usual planning statement that supported the scheme considering adopted planning policies and other planning decisions including appeals for nearby sites, which he had won for the same client. The purpose of the scheme was to close off the cul-de-sac of new housing with two new stunning, architectural designed individual homes.

During the early phase of the application, Darryl attended the Parish Council and gave a deputation supporting the scheme, despite dozens of local people objecting to the scheme.  During the deputation, Darryl was able to remind the Parish Council of the planning merits and offered an opportunity for residents to engage with him, to express their concerns.   Following the Parish Council meeting, the planning officer shared his own concerns regarding the original plans however following a pro-active session between the client and his design team, amended plans were prepared and submitted with robust arguments by Darryl to address all of the concerns raised.

The feedback that the planning officer gave Darryl was one of positivity and acknowledgement as the drawings and the planning arguments had resulted in a significantly better scheme. The architectural language was accepted as offering contemporary influences to buildings that would reside in an older area of traditional pitched roof housing. Darryl was able to argue for the plot sizes, the amount of amenity space and the relationship of windows to nearby residents and over the adjacent footpath. Richard was able to argue for the retention of protected trees and where necessary planting of new stock to soften the impact of the development. Overall, it was a real team effort that Darryl was proud to lead.

The revised plans and the arguments presented were accepted and the planning officer supported the scheme using his delegated powers.  Needless to say the client is extremely pleased with Darryl’s performance and that of the wider team.

If you have a piece of land and you want to know or achieve its maximum development value, then please contact one of Pure Town Planning ‘s consultants to start that discussion.