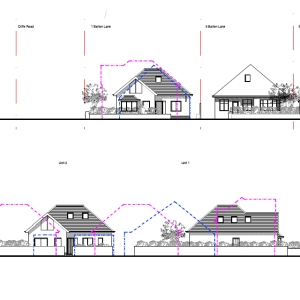 New Forest District Council: Matt Annen is pleased to confirm that planning permission has been granted for the demolition of an existing tired, run-down bungalow and the erection of two chalet bungalows on Barton Lane, Barton-on-sea, New Milton. The scheme was designed by local firm; DOT Architecture.

The Inspector did however raise a technical objection about the Council’s standard approach to securing habitat mitigation contribution. As part of the appeal process the Council considered that if the Inspector was mindful to allow the scheme, a Section 106 legal agreement could be secured by an appropriately worded planning condition. The Inspector found that this approach was inappropriate.

The planning officer in considering this recent application confirmed that this approach to dealing with habitat mitigation is a process which the Council has been operating for a considerable time and has been accepted by other Planning Inspectors. As the determining authority the Council confirmed that this approach meets the tests for reasonableness as set out within the National Planning Practice Guidance.

Planning was approved in line with the specified targets date much to our delight:

“Amazing news!!! Our hard work and determination has paid off! Thank you so much for all your work and huge thanks to Chris also for his work in the past! I won’t hesitate to use Pure Town Planning again on my next project”.

If you have a property on a large plot or with a large side/rear garden that you are looking to develop or maximise its potential, then please contact Pure Town Planning for a free confidential consultation.