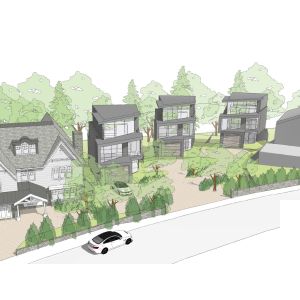 Borough of Poole: Matt Annen is delighted to announce that on the last day before the office closed for the Christmas break he secured planning permission for the demolition of an existing house and the erection of 3 large detached family dwellings (as well as extensions to an existing neighbouring dwelling) in the desirable area of Evening Hill near Sandbanks.

This sleek, innovative and highly contemporary scheme was designed by Bradley Cheer at Anders Roberts Cheer architects for our clients Amirez Developments Ltd.

This scheme followed a previously refused scheme for 5 dwellings across the two sites. That scheme was refused because the Council felt that the proposed sub-division which would result in “a restricted frontage, extensive building depths and limited gaps between dwellings which would amount to overdevelopment, appearing cramped and at odds with the character of the streetscene”. Following the refused application we entered into pre-application discussions with the appointed officer, which following a number of subsequent amendments led to scheme which was considered to overcome the previous concerns.

On this revised application, the appointed officer confirmed that the amended scheme had addressed the previous concerns and that “The proposals by virtue of their siting, layout, gaps between dwellings, design, massing and relationship to neighbours will preserve the character and appearance of the street scene and maintain neighbouring privacy and amenities”. The application was approved two days after the original 8-week target date which given the Council’s current limited resources and the fact that it was coming up to Christmas was not bad going at all. Our client was delighted and it was a great early Christmas present for them.

If you are planning a housing development and are looking for a firm with a “never say die” attitude and a proven track record of successfully negotiating schemes through to approval then we would be delighted to assist you too. Call us today on 01202 585524 or email us at info@puretownplanning.co.uk to take advantage of our confidential FREE half hour consultation offer.