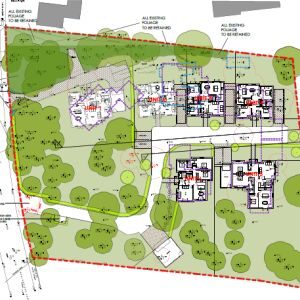 Dorset Council:  Matt Annen is delighted to share the news that on New Years Eve, full planning permission was secured for the demolition of a bungalow and the erection of 6 dwellings on a site in St Ives, near Ringwood.  The scheme followed a previously successful application for 5 houses which was also secured by Pure Town Planning.

This latest scheme was designed by local firm Anders Roberts Cheer who felt that the previously approved scheme could be improved upon and re-designed the layout and style of dwellings to accommodate a sixth dwelling in order to maximise the development value of the site for the client.  Pure Town Planning prepared and submitted a robust planning application with a comprehensive supporting Design an Access Statement justifying why the additional density was acceptable. The planning officer agreed stating in his report:

It is noted that for the previous applications for 4 and then 5 dwellings, objectors raised concerns that the proposals represented over development of the site and that same objection has been made again for this application. However, the current proposal, although for six dwellings, is still only equivalent to approximately 12 dwellings per hectare (dph) which is significantly lower than the minimum density of 30 dph encouraged by the policy.

If you have a site and would like to explore its development potential, or have received permission but you think it can deliver more then please let one of our planning consultants review the site and the adopted policies, to establish if there is a viable way forward to increase your financial gain.