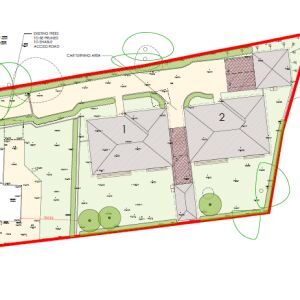 During the planning process following a number of objections being received from neighbouring residents the planning officer raised initial concerns regarding the principle of backland development. Although there was no backland residential development within the immediate area of the site, we were able to forcibly argue that within the wider area, many of the properties were originally provided with deep rear gardens and there were numerous examples within the surrounding roads and locality of subsequent backland residential developments. Furthermore, we directed the planning officer to an appeal decision where the Council had claimed that backland development would be undesirable form of development in this location and although the appeal was dismissed for other reasons, the Inspector concluded ‘I do not consider that the proposed development would have an unacceptable adverse effect on the character and appearance of the area.’ So following robust justification and strong negotiation we were able to convince the planning officer that the principle of development was acceptable and subsequently the scheme was moved forward and approved under delegated powers earlier this month.

If your property has a large garden area either on it’s own or in combination with neighbouring plots and you are looking for a firm who will work tirelessly to steer your development through the planning process and secure that all-important planning permission, then why not give us a call on 01202 585524 or send us an email to info@puretownplanning.co.uk for a consultation.