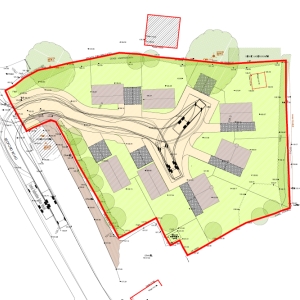 Central Bedfordshire Council: Matt Annen, director of Pure Town Planning is delighted to share the news that just before Christmas he secured outline planning consent for 7 detached dwellings on an undeveloped parcel of land in the Bidwell area which is to the north of Houghton Regis in Central Bedfordshire. The supporting plans were designed by architects ARC Architecture.

The site fell within the South Bedfordshire Green Belt and within the red line boundary of the Houghton Regis North Framework Plan (adopted October 2012). The site was also located in the North Houghton Regis Strategic Allocation (HRN) in the emerging Local Plan. This allocation was identified to accommodate the needs of a growing population in the area, and was supported by a substantial body of evidence underpinning the growth strategy. The Houghton Regis North Framework Plan was adopted for development management purposes in October 2012 and provides a broad framework for an urban extension to assist developers in formulating planning applications. However whilst the site lay within the red line area of the HRN Framework Plan, it was not actually identified for development in the Framework Plan.

Pure Town Planning presented a robust application which pointed to a number of applications on surrounding sites that have come forward in HRN and have been approved, some of which have been constructed or are under construction, thereby demonstrating the Council’s commitment to growth in this area. Notwithstanding this position, the site was still designated as Green Belt and therefore Very Special Circumstances (VSC) needed to demonstrated.

Matt put forward a comprehensive argument which demonstrated that the site failed to meet the five purposes that the Green Belt serves and offers the opportunity to create 7 new residential homes in an established area for urban expansion. The VSC’s put forward were:

The key circumstance related heavily to the residential expansion of the framework plan. Having given consent for surrounding sites to be used for housing, it was an unusual set of circumstances for an area to be developed in an allocation that is part of an emerging plan, and still part of the Green Belt. However in weighing up the ‘planning balance’ the appointed officer considered that the principle of developing the site is likely to be acceptable and is consistent with the approach taken in the determination of similar applications.

The planning application was an unusually lengthy process not least because of its green belt location but also other factors such as archaeology, ecology and highways all of which were overcome during the planning process. We stuck with it, kept driving the scheme forwards and eventually achieved a well deserved successful outcome for our client, who was naturally delighted: “It goes without saying your expertise in this protracted project has been immense. Can we please wish you all the very best and thank you for your help and guidance and I’m sure we will be using Pure Planning again!”

If you have a rural site and have been wondering whether it has any development potential either now or in the future, then why not contact Pure Town Planning for a FREE initial consultation.