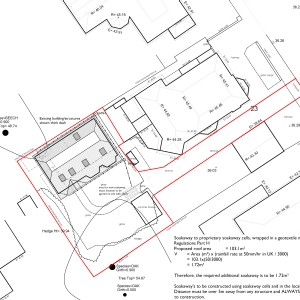 BCP Council (Bournemouth): Matt Annen is thrilled to announce that he has recently secured planning permission for the erection of a chalet bungalow dwelling to the rear of a block of flats in Boscombe, Bournemouth. There was added pressure on this project as the client in questions was in fact Matt’s wife’s parents- “The In-laws”… So it was lucky that a consent was secured as a refusal would have been awkward round the dinner table and could have led to divorce!

The scheme was professionally designed by Jon Blackmore of Watts Holt who delivered a scheme which met the client’s brief whilst staying within the constraints of the site. The impact on protected trees was successfully mitigated with a statement prepared by Andy Ludington of Treecall Consulting.

As part of the application, Pure Town Planning prepared a thorough supporting Design and Access Statement explaining the unusual history to the site and setting out the merits of the proposal in a clear and concise manner.

The planning officer initially raised some concerns with the proposed development which following lengthy discussions and negotiations between the Matt and the appointed officer prompted an amended set of plans, alleviating the previous issues raised. Upon final consideration with the team leader, the Council agreed with our conclusions Granted planning permission for the development earlier this week.

The clients “Baba and Ian” (how Matt’s children know them!), were absolutely delighted with the decision and are now preparing to embark on their self-build journey which we wish them all the best with.