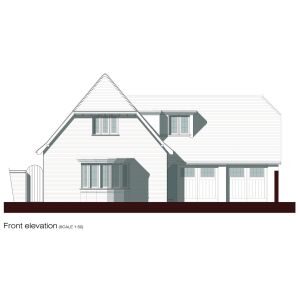 Dorset Council (East Dorset):  Darryl Howells has secured full planning permission for the demolition of an existing bungalow and the erection of a detached chalet bungalow with vehicular access and car parking.  The plans drawn by award winning architectural practice Scott Worsfold Associates but the client instructed Darryl to submit and handle the application due to his knowledge of the site, negotiation skills base and pro-active working relationship that he has with the Council.

The scheme was accompanied by a robust planning statement prepared by Darryl which set out the planning merits of the scheme and also how the proposal overcame the concerns of a Planning Inspector for a previous scheme, where neither Darryl nor Pure Town Planning were involved as the agent.

In her delegated planning report, the Senior Officer acknowledged that the proposed development is “considerably higher and bulkier than the neighbouring bungalows, however unlike the previously refused proposal, the generous spacing between the dwellings is maintained by this scheme. The gaps between dwellings are retained, and this assists in reducing the impact of the dwelling in the streetscene to a level which is, on balance, acceptable in relation to the existing rhythm and scale of development on this side of Sandy Lane”.    The scheme was subsequently approved quickly by the officer.

If you have received a refusal of planning permission or had an appeal dismissed, then please contact one of our planning consultants to discuss, as we maybe able to suggest a way forward that overcomes the identified harm and turns a negative to a positive, and will generate additional income.

Won on appeal: Householder alterations and roof extension in Southbourne