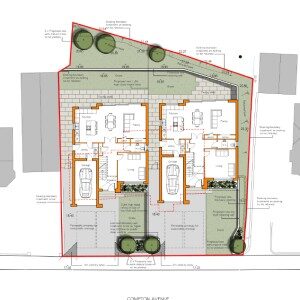 BCP Council (Poole):  Matt Annen, a Director of Pure Town Planning is delighted to share the news that he has recently secured planning permission for the erection of two contemporary family dwellings in Lilliput, Poole. This clever plot subdivision with impressive and innovative design was created by local firm LMA Architects for clients Charlew Developments.

Despite a robust submission with comprehensive supporting Design and Access Statement, the scheme attracted early local opposition from neighbours who not only had the ear of the Ward Councillor who subsequently ‘Called In’ the application to planning committee but amazingly the neighbours also managed to get an article for this relatively minor scheme in the Daily Mail: see link here (must have been a slow news day!). Thankfully the Case officer was not deterred by these underhand tactics and made a recommendation to the Committee that they should approve the application.

At Planning Committee back in April, almost uniquely the Members could not be drawn either way with a move to refuse failing on the chairman’s casting vote and a subsequent move to approve also not achieving a majority vote so the application was deferred and we set about supplying further information to convince members one way or the other.

Firstly, a full Ecological Appraisal was carried out which confirmed the existing dwelling, garage and trees within the site hold ‘negligible potential’ for bats. Thereby successfully overcoming this previous area of concern for some members.

Secondly, the Ward Councillor raised concerns with regards to the building line being out of keeping with the street scene. To address this concern Simon at LMA architects increased the distance from the garages to the road. However we also pointed out to Members that previously the proposed houses were actually set back further into the site than the existing dwelling, so the proposed scheme would better reflect the line of existing dwellings either side than the existing. Furthermore the Ward Councillor also raised a concern regarding the plot widths. Matt carried further character appraisals to demonstrate the plot widths were almost identical to the properties opposite and numerous other plots in the Road. So in terms of the rhythm and spacing of properties we put forward a convincing argument that the scheme would  be reflective of surrounding arrangements.

Thirdly, one Member had an issue about the site not being within 400m of a district centre (where additional development should be directed). Matt reminded the committee that Plot splits in this area were being approved on an almost weekly basis and an OS map was also circulated to Members demonstrating that within 300m of this site there were 16 examples of plot splits (all outside of 400m of a district centre).

Lastly, the proposal resulted in the loss of a poor quality group of protected trees along the rear boundary of the site and one on the site’s frontage. The removal of these trees was fully justified by Treecall Consulting who along with the Council’s Arboricultural Officer confirmed to Members that these trees have come to the end of their useful life and because of their species will continue to experience branch failure and as such their visual amenity value will decline over the next 10 years. To mitigate this loss the scheme provided 6 new trees which would enhance the amenity contribution of the area providing future tree cover for the development and wider surrounding area for the next 100 years.

The application went back to Committee earlier this month and in light of the additional info and robust arguments which were again presented in the deputations, this time the majority of Members agreed with the officer’s recommendation and Approved the scheme (8 votes to 4). As evident in this case, here at Pure Town Planning we work tirelessly to secure planning permission for our clients. If you have a potential residential development and are looking for a firm who will steer your scheme through the planning process to a successful conclusion, why not give us a call or email info@puretownplanning.co.uk.