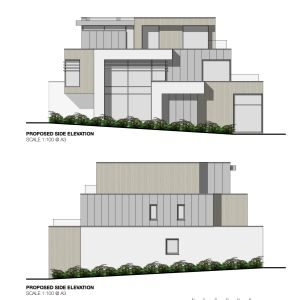 BCP Council: Matt Annen is delighted to have secured full planning permission for the erection of two large contemporary detached houses on Sandbanks Road between Poole Park and Ashely Cross in Poole. These stunning 4-bedroom properties, have been designed to a very high standard by Marlow Architects for a mutual client.

The scheme followed a pre-application advice response which raised concerns over a flat roof design and a 3 storey height. However, since that advice the Council somewhat contradicted themselves by granting planning permission for the construction of a second floor (3 storeys in total) with a flat roof design on the neighbouring property! Therefore the applicant quite rightly ‘stuck to his guns’ by insisting that the design of the houses should remain with flat roofs Given the adjacent decision the Council made it very difficult for themselves to deem that flat roof design was out of character and thus really had no option but to now deem that a contemporary flat roof design was acceptable.

Policy PP28 relates to plot severance and states that severances will only be permitted where there is sufficient land to enable a type, scale and layout of development including parking and usable amenity space to be accommodated in a manner which would preserve or enhance the area’s residential character. Pure Town Planning put forward a robust justification that whilst the resultant plot sizes of the proposed dwellings would be narrower than the majority of the plots in the area, we directed the appointed officer to a number of frontages of other plots along Sandbanks Road which were comparable. Similarly the proposed footprints would also be large in comparison to the resultant plot sizes, however through a comprehensive supporting statement and strong negotiation throughout the planning process the officer considered that the proposed layouts and scale of the development would not be so materially harmful to the character and appearance of the area as to warrant the refusal of the scheme on these grounds alone.

The scheme was approved in almost exactly 3 months. Not a bad timeframe given the lack of resources and capacity issues faced by BCP Planning department, together with the nature of the development (plot split), the fact that it spanned the Christmas holidays and considering that the scheme was reallocated from the original officer to a new officer at the last minute.

If you have a property which you believe could have potential to accomodate 2 (or more) dwellings on and would like an opinion on what might be achievable then get in touch (contact Pure Town Planning). Who knows, our next plot split approval web post could be yours!