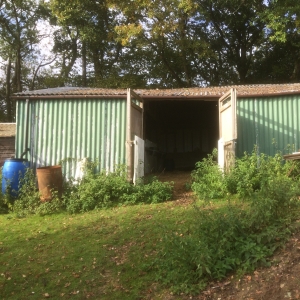 Dorset Council (Purbeck): Matt Annen, a director of Pure Town Planning is delighted to have recently secured permission for the change of use of an agricultural building to a dwelling house near Lytchett Matravers in Dorset in accordance with the provisions set out within the Town and Country Planning (General Permitted Development) (England) Order 2015 (as amended) at Schedule 2, Part 3, Class Q .

The agricultural to residential conversion permitted development right, was first introduced in April 2014, but it has been notorious for the high percentage of prior approval applications which Council’s have turned down. Eventually the Government took the unusual step of issuing further guidance in order to try and clear up some of the worst ambiguities or misinterpretations of the legislation.

Matt was approached by two friends and property professionals from PPN Bournemouth to look at using the permitted development right on this rather ramshackle timber-framed barn. A previous attempt by the farmer/owner for a prior approval had failed due to insufficient information. Matt approached Rob Nabney of Nabney Plans to prepare the supporting drawings as he knew that Rob had previous experience of these types of conversions. One key area to address the failings of the previous attempt was to demonstrate that the building was physically capable of conversions and to do this Matt called in Brian Willis of Civil and Structural Engineers firm; B.E.Willis Partnership to provide a robust Structural Report.

With the above “prior approval power team” in place, we believed a revised application was worth a try, because without the permitted development right there would be zero chance of obtaining a new residential dwelling in this countryside location which was within the South East Dorset Green Belt and also sat adjacent to a group TPO trees. Pure Town Planning prepared a comprehensive planning statement justifying compliance with the adopted legislation. On review of the relevant policies the appointed planning officer considered that the development complied with the limitations and restrictions specified in Class Q1. The proposal was therefore considered to form ‘permitted development’ and this time the Council issued a notice to say that prior approval was not required – which means that the proposal can commence forthwith.

If you have an agricultural building which you think might be capable of conversion to a residential dwelling then why not give us a call on 01202 585524 or email info@puretownplanning.co.uk for a free confidential appraisal.