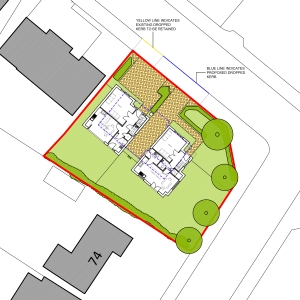 BCP Council (Bournemouth): Darryl Howells has secured planning permission for the demolition of one house and erection of two houses in the Talbot Woods area of Bournemouth.  The scheme was designed by ARC Architects.

The application followed a dismissed appeal against an identical scheme which Bournemouth Borough Council (as it was then) had refused permission. During the appeal Darryl convinced the Planning Inspector that two houses, whilst on significantly smaller plots than prevailed nearby, would not be harmful to the character of appearance of the area.

Whilst the Inspector accepted all of Darryl’s arguments, the appeal was dismissed solely on a technicality – due to the lack of certainty the Council’s own unilateral undertaking gave in respect of the heathland mitigation contribution and if the payment would actually be spent by the Council in that manner.

Following the dismissed appeal, Darryl resubmitted the planning application again in the knowledge that the Council would accept its own legal agreement, and that the Inspector’s decision resolved all other issues such as character, form, design, layout, trees and parking.

The second application was supported by the planning officer but taken to Planning Committee as local residents claimed the Inspector did not properly review the relationship to neighbouring amenities. Darryl presented a convincing deputation to the Committee advising them that the Inspector had indeed considered the neighbours and if this second application was refused on this basis, that would represent unreasonable behaviour.  The Team Manager then the Council’s legal officer confirmed Darryl’s professional opinion and steered the application to an approval.

This case highlights two successes, the first being the win over the Council’s primary reason for refusal of impact to character and appearance of the area; and secondly the approval of the scheme once submitted to resolve the issue highlighted by the Planning Inspector.

If you have received a negative response by a determining authority, please contact a consultant from Pure Town Planning who will be able to advise of an alternative solution that could turn the negative into a positive.