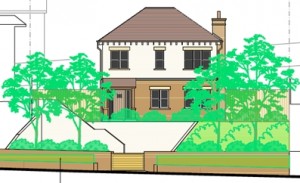 Bournemouth Borough Council: Pure Town Planning are pleased to announce that we have just secured planning permission to split an existing large plot on Wimborne Road in the Northbourne area of Bournemouth. The consent is to for a new plot for a detached three-bedroom dwelling with associated access and off-street parking.

This site had extensive planning history with four previous applications for a variety of residential proposals, all being refused at local level and subsequent appeals. Once the application was live with Bournemouth Borough Council, the Case Officer came back with his initial thoughts recommending that we withdraw the application or it would be refused. He stated his concerns about the width and height impacting on neighbouring properties and the impact on the street scene due to the proposed access off Wimborne Road would be too much.

Not being one to give up or withdraw an application, we successfully convinced the Case Officer to allow an extension of time to allow amendments as we felt that there was a way forward. Closely working with Union Architecture, we produced a further two sets of amendments to zero in on what the Case Officer considered acceptable upon the site and was finally granted planning permission.

So if you have a site, which has extensive planning history for refusal and you want a fresh set of eyes and a never give up attitude why not give Pure Town Planning a call and see how we could help.

Approved: mixed-use building of offices and flats in Hamworthy, Poole

BCP Council (Poole):  Darryl Howells, a director of the fir[...]