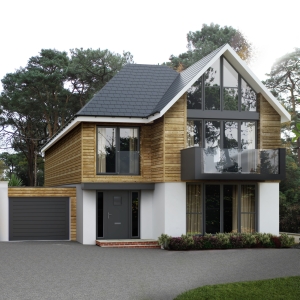 The application was a revised scheme following a very similar development on the site which was refused in November’s Borough of Poole Planning Committee last year by the narrowest of margins (Chairman’s casting vote). Since that time, the applicant and the design team went away, listened to Members’ comments and their suggestions during the debate and responded by introducing improvements to this revised scheme. Despite these changes the planning and conservation officers remained unconvinced that the site was suitable for an additional dwelling, it went back to the Committee on on 22nd February 2018 with a recommendation to refuse.

Pure Town Planning argued that this scheme had addressed previous concerns and was acceptable for the following reasons:

Firstly, on the previous scheme two accesses were proposed; the existing was to be retained and widened for the new dwelling and a new access was introduced for the existing dwelling. Members previously noted that the increase in width to the existing access was necessary on highway safety grounds as the existing access is very dangerous with poor visibility, but that the combination of the two access would result in a total width of 18m across the frontage for the driveways (including visibility). Members felt the loss of hedging for the new access could detrimentally impact on the dense hedge screened character of this section of the road. A single access point to serve the 2 dwellings was suggested during the debate. The applicant took this advice on board and amended the scheme accordingly, which significantly reduced the amount of hedging to be removed, ensuring the site would still present as a verdant, green, maturely screened site where the houses are only glimpsed from the road – a characteristic of Branksome Park conservation area.

Secondly, with regards to the “principle” of plot sub-division in this conservation area, Pure Town Plannig argued that the LPA no longer have a policy which dictates that plot sizes within Branksome Park need to be of a certain area. However, the key test is that new development should respect the rhythm, pattern and spacing of the surrounding area.

Our director Matt presented a strong deputation to Members pointing out that along this eastern side of Canford Cliffs Road, the character of the built environment is very different to other areas of Branksome Park, which are more generous in terms of house and plot sizes. In section of Branksome Park plot sizes (Nos.3-15 Canfrod Cliffs Road) tended to be quite deep and narrow with houses on a consistent building line which often span the width of their plots. Nos. 17, 19 and 23 Canford Cliffs Road seemed to go against this established grain and pattern of this section, with No.25 and 27 Canford Cliffs Road, to the south of the site regaining this pattern before the junction with Western Avenue. Whilst the planning officer has dismissed the ‘missing plot’ No 21 as being irrelevant to the justification of the plot subdivision, where house numbers have been missed out (No.21 Canford Cliffs Road in this instance), it was a clear indication to us that when the area was originally laid out it was intended for there to be a dwelling in this location.

Despite the total plot width being 41m (identical to the combined sizes of Nos. 3 & 5 Canford Cliffs Road), previously the site was split unevenly, one was below the average at 17m and the other plot was larger than the average at 24 metres. To overcome this, the revised scheme was split more proportionally into a 21m and a 20m wide plot which is was considered to be wholly characteristic of the prevailing plot widths along this section of Canford Cliffs Road.

Lastly the planning officer raised a concern in respect of the proposed house being visible in the street scene, a view which some Members shared at the previous committee. To provide those Members with some comfort in terms of the actual impact that the proposed dwelling would have on the street scene, the applicant commissioned a CGI from outside of the site. The location of this CGI was purposely chosen, in the spirit of openness and honesty because this was going to be the most prominent view of the new dwelling, if a person was standing exactly in this spot, an angled view would be possible, above the gate of a small part the new dwelling. However this view would only be visible for a short moment, another couple of metres up or down the road and the tree screen would completely block out any views of the new dwelling. So, because of the dense intervening tree and hedge screening (which was to be retained) the new dwelling would not be readily visible.

After a lengthy debate the majority of Members on the Planning Board agreed with our view that the scheme would not undermine the sense of spaciousness or dominance of vegetation which the adopted Conservation Area Management plan explicitly seeks to protect and that the scheme would continue to preserve and enhance the character and appearance of the conservation area. The scheme was subsequently APPROVED 6 votes to 3.

Whilst this decision is ‘ground breaking’ in one sense because there have been very few plot sub-divisions within this conservation area, it is important to note there is no such thing as a precedent in planning.

We stress that each application will be determined on its own merits. We know this application was watched with keen interest by a number of other homeowners along Canford Cliffs Road and no doubt a number of developers will now consider there to be an opportunity along here.In this instance we were able to successfully demonstrate that a new dwelling could be accommodated on the site without disrupting the rhythm and spacing of dwellings on this particular stretch of road.

If you have a property on this road, in this conservation area or elsewhere which you feel has potential for infill development, please take advantage of our FREE OF CHARGE planning appraisal service. Give us a call on 01202 585524 or send us an email to info@puretownplanning.co.uk and we shall take a look and come back to you with our honest and realistic advice… what have you got to lose?