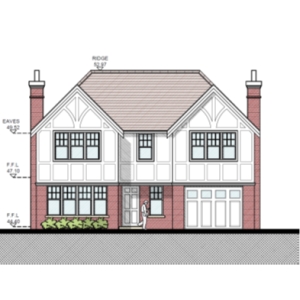 Bournemouth Borough Council: Pure Town Planning are delighted to announce that they have secured planning permission for a plot split and erection of a family dwelling in the Meyrick Park and Talbot Woods Conservation Area.

An application for a similar scheme was refused on the site and dismissed at appeal in June 2017. Although Bournemouth Borough Council refused the scheme on the grounds that it would be detrimental to the spacious character of the conservation area, at appeal the Inspector did not agree with the LPA and dismissed the appeal due to the unclear building line of the property resulting in a potentially prominent building. As such, Pure Town Planning advised the applicant that a revised scheme may be able to overcome these concerns.

Through collaboration with Anders Roberts Cheer Architects who designed the scheme, and after negotiations with the planning officer, we arrived at a scheme which we considered to resolve the issue raised on the previous scheme. As justified in our supporting Design, Access, Planning and Heritage statement, design alterations were made to ensure the proposed dwelling would harmonise with the conservation area’s character; the front porch was removed, the roof height was reduced by 1 metre and the building was repositioned in alignment with the street’s building line.

If you are considering a potentially contentious residential development within a conservation area and are looking for a firm who will work determinedly to steer your development through the planning process and secure that all-important planning permission, then why not give us a call on 01202 585524 or send us an email to info@puretownplanning.co.uk for a FREE 30 minute consultation.