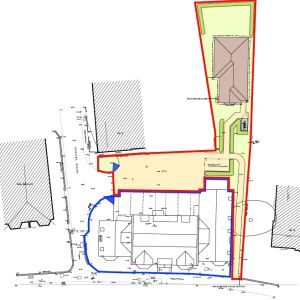 BCP Council (Poole area): Matt Annen is delighted to share the news that planning permission has been Granted for a new bungalow on a redundant part of a flatted site which is currently under construction on the former Tyre Land garage site in Ashley Cross. The scheme was designed by local firm Anders Roberts Cheer for mutual client; Amirez Ltd.

Have cleared this previously overgrown part of the site during preparations for construction of a block of 14 flats which PTP also secured (see link here), our clients came to us with a proposal which initially consisted of putting the bins and cycles stores in this area which would then free up space within the approved flatted development for an additional 1 bed flat. Given that construction of that scheme had already started Matt felt this would be messy and that there could be potential for a 2 bed bungalow on this land to the rear which clearly would deliver an increased return and maximise the development potential of the site for the client.

Following an initial query raised in respect of the bungalow taking one of the parking spaces of the approved flatted development which was easily addressed via the explanation that being in Zone A on the Parking SPD map neither development actually required any parking. This was reinforced by the highways officer’s support being received for the development.

After making her assessment the planning officer concluded that:
· The principle of residential development on site is acceptable.
· The proposal would preserve the character and appearance of the area.
· The character and appearance of the Conservation Area would be preserved.
· It would have no materially harmful impact on the amenities of the neighbours.
· Sufficient off-road parking provision would be provided.
· There would be no additional impact on highway and pedestrian safety in the vicinity of the site.

The application was approved in line with the target date (a result in itself these days!) much to the client’s delight.