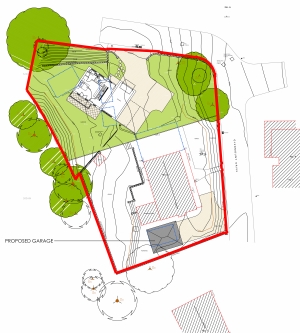 Borough of Poole: Pure Town Planning are celebrating yet another plot severance and new build house on former garden land. It seems in 2015 “garden grabbing” has come back with a bang! The latest addition to Pure Town Planning’s long list of approvals this year took a garden plot with a considerable history of failed applications by other applicants/agents and by using a fresh approach PTP were able to successfully convince the Borough of Poole planning officer that this site was suitable for the addition of a new house.

There was a previously refused scheme on this site back in May 2015 which sought the demolition of the existing house and erection of two dwellings. In light of the Officers’ concerns regarding eroding the character, layout and gaps in the streetscene, a significantly amended, reduced and more sensitively designed proposal was submitted, which was then accepted by Officers as being fully compliant and a vastly superior scheme which overcame all previous concerns of the refused scheme. Incidentally we have taken the previously refused scheme to appeal, so we may end up winning that one too and providing our client with 2 consents to choose from – watch this space!

A key characteristic of this section of the road was deemed to be the layout of plots and gaps between houses creating a sense of spaciousness. Under the revised scheme, the Planning Officer had recognised the significant departure from the refused scheme and the substantial improvements made through the retention of the existing house and reduction in footprint of the proposed dwelling. These two design alterations worked in conjunction to create a wider gap between the two properties which was eventually accepted by the Officer as reflecting the average spacing and existing character and rhythm of development in the street scene.

Matt places his success down to two main factors: firstly a well thought out and comprehensively supported application to Borough of Poole with well presented plans prepared by Anders Roberts Cheer Architects in order to persuade the appointed officer that the concerns on the previous scheme had been fully overcome and secondly constant contact and liaison with the appointed planning officer throughout the planning process, addressing any queries/issues promptly as they arose and guiding the planning officer towards a positive recommendation.

If you are wondering whether your garden, either on its own or in combination with neighbouring gardens, has any development potential then we would be delighted to advise you. We offer a confidential FREE half hour consultation to discuss whether back-land (or side garden!) development on your property is a possibility. Call us on 01202 585524 or email matt@puretownplanning.co.uk to find out how we may be able to help.