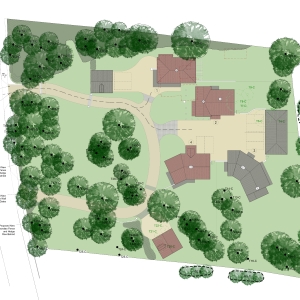 Dorset Council: Darryl Howells has secured full planning permission for the demolition of an existing bungalow and the erection of four detached chalet bungalows on a site in St Ives near Ringwood, in the former administrative boundary of East Dorset District Council.

The site came with a lot of baggage in planning terms.  Firstly the site has dozens of protected Scott Pine trees around its perimeter and within the garden area itself.  In recent years, a tree work application to remove several of the trees from the grounds had been refused and dismissed by a Planning Inspector who stated that there were several important trees within the grounds that must be retained for amenity purposes.  This decision effectively sterilised the site from development until now.  Another decision was the grant of planning permission to erect a dwelling with a new in and out vehicular access that had been partially implemented.

The applicant instructed Darryl based on has past experience and previous successes on sites of similar environmental constraints.  Using the award-winning architect Gary Worsfold of Scott Worsfold Architects based in Ferndown, a scheme that comprised the four chalet bungalows was designed utilising the new partially implemented access to effectively create a ‘horseshoe’ in and out vehicular arrangement that positioned the houses on the outside of the access.

Using the support of John Hearne, arboricultural consultant, Darryl successfully proposed the creation of a managed woodland garden that retained many of the trees inside the ‘horseshoe’ driveway and therefore maintained, enhanced and managed visual amenity to the street scene.  Doing so, gave the Council’s planning and arboricultural officers the necessary comfort to accept the proposed development in relationship to the retained trees.  The positioning of 2 houses took full account of the trees that the Planning Inspector had highlighted of worthy of retention which again the Council officers embraced.

The design of the houses were of traditional design however included contemporary elements of architecture that influenced their layout, space for intended occupiers and orientation to private gardens.  The scheme secured the full support of the Council officers and was determined under delegated powers.  The decision has effectively ended a considerable wait of over six years for the client to be able to develop the site to its potential as previous decisions and planning arguments had blighted the site from becoming occupied by more than 1 dwelling.

If you have a site that you feel can be developed but there are environmental constraints preventing it being so, or previous adverse planning history, then contact the consultants at Pure Town Planning to find out how we can assist.