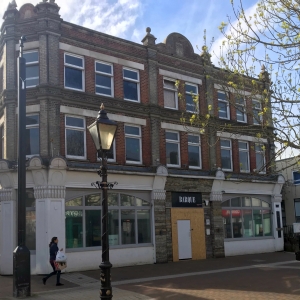 Borough of Poole: This week Matt Annen has secured a full planning and Listed Building Consent for a town centre regeneration scheme on the High Street in Poole. The proposal consisted of partial demolition and extensions to a listed building to create an shop/office unit (Use Classes A1 or A2) on the ground floor with 21 flats set over the ground, first and second floor. The proposals were designed by local architects ARC Architects who prepared plans which sensitively extended and redeveloped this listed building site within what was a challenging location within Poole Town Centre Conservation Area and adjacent to other locally listed buildings.

The site falls in the Town Centre Heritage Conservation Area and is a Grade II listed building. The original building dates from the 18th century, with 19th and 20th century alterations and 20th century extensions. The listing description focuses on the exterior details and indicates that with the adjacent properties, these are earliest of an important group of 18th century merchants town houses in Poole. The planning officer deemed that the sections of the building to be demolished, whilst forming part of the Listed Building have less significance and do not make the same level of visual contribution to the character and appearance of the Conservation Area. Nor do they include the extent of detailed craftsmanship, use of materials or active, engaging elevations as the frontage section of the building. Because of the amount of the building to be demolished the impact would be significant, however because of the nature of that part to be demolished and that to be retained the impact on the Grade II Listed building was considered by the planning and conservation officers to be less than substantial and thus the Conservation Area would not be harmed.

Due to the site’s proximity to the harbour it was subject to flood risk in the future. However there was no objection on this front as the finished floor levels for the residential element were above the future flood risk.

No car parking was proposed with the scheme. The Council’s adopted parking standards do not currently support zero parking, however the highway’s officer recognised the size of the existing premises and its lack of on site parking, the sustainability of the location and thus did not object subject to a condition securing provision of a car club near the site for residents use which the applicant’s put forward.

In arriving at his final recommendation the appointed officer concluded that the principle of residential development is consistent with Local Plan policies directing additional residential development to the most sustainable locations, supporting highest densities in the town centre due to the benefits it can bring to the vitality, vibrancy and viability of the Town centre and the services, facilities infrastructure and public transport available. Policy PP6 focuses on the High Street, Quay and Old Town, with the site falling within a specific ‘Lagland Street and Hill Street ‘sub-area’.

The scheme was determined under delegated powers and whilst took longer than allotted 13 weeks determination period, given the complex nature of the site, listed building etc as well as the importance of delivering a much needed regeneration in this part of Poole’s High Street, this was to be expected.

If you have a potentially complex or delicate site whether that be a Listed building, Locally Listed building or are looking at a development within a conservation area, the Pure Town Planning have a proven track record for delivering sensitive developments in such locations. Call us on 01202 585524 or email info@puretownplanning.co.uk.