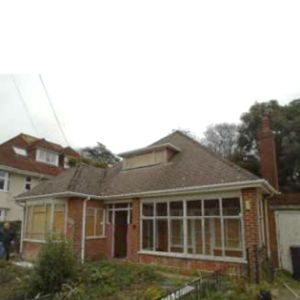 BCP Council (Bournemouth area): Chris Miell has recently secured planning permission for the erection of a pair of semi-detached dwellings with associated access and parking.

The application site is located on Browning Avenue and occupied by chalet bungalow which is in a poor state of repair. The site is located with an established residential area whereby properties are typically detached dwellings and purpose built flatted blocks ranging from 2 to 3 storeys on varying sized plots, which are laid out in a linear pattern fronting the highway.

In terms of the local vernacular, there are a variety of architectural styles and influences present within the surrounding context of the application site. There are examples of early 20th Century architecture, interwar development and some more recent flatted developments. Nevertheless, properties are predominately based on traditional forms and a mix of finishes are present from the street including render and brickwork under concrete and clay tile roofs

Given the Council’s housing land supply shortage, an important consideration from the outset was to ensure that the site was utilised in efficient manner to make the best use of available land. To this regard, the proposed development would provide a pair of semi-detached dwellings, both of which are suitable for family housing.

Given the site context, which is predominately detached dwellings situated within spacious plots with good separation distance between neighbouring properties, the layout and appearance of the development has been carefully designed to give the appearance of one detached dwelling at site, which would be similar in massing to the neighbouring properties.

Once the modelling work was completed, the proposed development was expertly designed by ARC Architecture  who put forward a bespoke arts and crafts style property, which is based on the design principles established by architect Charles Voysey. The roof form of the development allows for a steep sloping roof form, which would safeguard the living conditions of the neighbouring occupiers by ensuring an appropriate level of daylight and sunlight would continue to enter the side facing windows of the neighbouring flats. Moreover, this architectural style would respond positively to the site constraints and the other traditional buildings along Browning Avenue, many of which date from the early 1900s. In addition, the proposal would reference other arts and crafts style properties within the wider area, such as ‘Sterlings’ and ‘The Briar-Patch’, both of which are listed buildings located on St Catherine’s Road in Southbourne.

To support the planning application, we prepared a robust design and access statement, which set out the merits of the proposal in a clear and concise manner, showing to the local planning authority that the proposed development would enhance the character and appearance of the area, whilst safeguarding the living conditions of local residents.

The application was approved by the Planning Officer who concluded that ”the proposed works would comply with policies CS21 and CS41 which seek to promote good design, maintain, and enhance the quality of the street scene and to provide a design which respects the site and its surroundings, as well as Policy 6.8 which seeks a high standard of layout and design, BAP1 in respect of the scale and density of development and the Council’s Residential Development Design Guide.”

If you would like to pursue a residential development, then why not call Pure Town Planning on 01202 585524 or email info@puretownplanning.co.uk to see how we can help you.