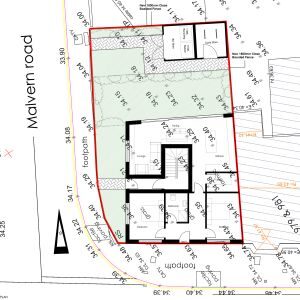 BCP Council (Bournemouth):  Matt Annen is delighted to share the news that planning permission has recently been granted for a 3-storey block of 4 flats with bin and cycle stores in Moordown Bournemouth. The scheme was designed by local firm Dot Architecture.

The site has remained undeveloped since mid 20th century and had been used for many years simply for advertising billboards. Whilst the site appeared to be open space, the loss of this green space wasn’t considered materially harmful to the locality. It was not designated as public open space and as such the private land is not officially useable for the public, as such it is unused land. The officer considered that the site currently contributes poorly to the street scene with advertising hoardings.

The scheme initially ran into difficulties with an objection from the highways officer, due to the 3 proposed parking spaces being considered to cause highway safety concerns by being too close to the junction, however through close liaison the appointed planning officer, determination of the original proposal was agreed to be delayed until the adoption of the new BCP Parking Standards SPD, which revised the parking standards for this area and meant that a zero parking provision would be acceptable. The parking spaces were subsequently removed from the plans and the highways objection was withdrawn and subsequently approval for the amended scheme was duly granted.

If you are looking for someone to guide your planning application smoothly through the planning system, be it complex or straightforward, why not contact a Pure Town Planning consultant to find out how we can assist?