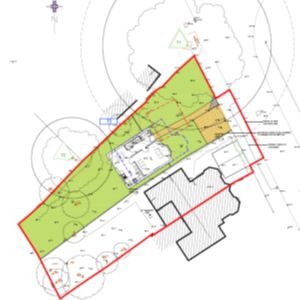 New Forest District Council: Jess Glover is delighted to have recently secured planning permission for the erection of a new 3 bedroom dwelling on Mount Avenue, New Milton. The plans were drawn by Anders Roberts Cheer with Arboricultural reports from Barrell Tree Consultancy.

The site comprises the side garden and detached garage of the existing property. The site is within the settlement of New Milton where the principle of new dwellings is accepted. A protected Monterey Pine Tree is located outside of the site boundary and was acknowledged as a key landscape feature in the streetscene.

The approval followed a few applications and appeals, however at each stage we considered that the site did still have development potential and the issues could be overcome.

The original application was recommended for approval but refused by planning committee based upon harm to the adjacent protected tree. We appealed the decision and the Inspector considered the tree was in too close proximity to the house. As such, we worked with the architect and arboricultural consultant and relocated the house further from the tree. Again the officers agreed that our proposal was acceptable but the planning committee overturned the officer’s recommendation. This time at appeal the Inspector too considered the proposal was acceptable, however a new issue had arisen in respect of nutrient neutrality of the Solent Coastal Protected Sites. Therefore, a final planning application was submitted and the applicant entered into an agreement to secure mitigation against harm to the Solent, which the Council found to be acceptable and they subsequently approved the application.

The client was delighted to have achieved a positive outcome. It was clear that there was a lot of neighbour objection to this scheme as despite the positive LPA recommendations on two occasions they were overturned despite the council’s tree officer agreeing there would be no harm. It just goes to show that perseverance with a site can pay off when you have the right experts on board. If you have a parcel of land and would like to pursue a residential development then why not call Pure Town Planning on 01202 585524 or email info@puretownplanning.co.uk for a FREE 30 minute consultation on how we can help you.