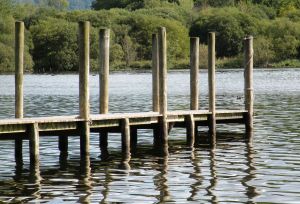 Christchurch Borough Council: Pure Town Planning have just “tied up” planning permission for a private jetty associated with a large waterside property in Christchurch, Dorset. We wish we could tell you that this “sailed” through without a “hitch” but that is “knot” the case…

This was “uncharted” territory for us here at Pure Town Planning, but Matt took the “helm” and kicked off the process with pre-application discussions with Natural England (as it was clear that they were going to be the biggest barrier to achieving permission). As suspected, following roughly 6 months worth of negotiations, Natural England had concerns that the proposed jetty would have a detrimental impact on Christchurch Harbour for two reasons – firstly, a reduction in the suitable area for feeding and loafing waterfowl and secondly that it may set a precedent for a proliferation of such structures.

Undeterred by this the applicant wanted to press on and an application for the jetty was submitted. The application was going surprisingly smoothly and with one week to the target date to go, the appointed planning officer had no concerns with the jetty and had made a recommendation to Grant which was posted on the Council’s website. Subsequently an objection came in from Natural England at the 11th hour well after the publicity period had ended and the officer’s recommendation duly changed to one of refusal.

This meant that the application had to go to planning committee to be determined. At committee Matt stood up and argued that just because a statutory body (in this case Natural England) objects it doesn’t automatically mean that an application should be refused.  Back in December 2013 we received planning permission from Central Bedfordshire District Council even though a three-page objection was received from English Heritage (also a statutory body) with regards to a nationally important Scheduled Monument (see here). We persuaded the Councillors that they were perfectly able to find the application acceptable, so long as the objection has been considered and due weight attached to it. So the only question for the Committee was really whether this objection from Natural England was so substantial so as to warrant refusal of the whole application?

In terms of – precedent-setting –  or as we like to call it “if we let you have one they’ll all want one”, we were able to explain to the Committee that in planning there is no such thing as a precedent. Each application should be determined on its own merits. This was particularly pertinent in this case as prior to the objection coming in, the planning officer did determine it on its own merits and actually supported the scheme to the point of making a recommendation to grant. With regards to Natural England’s other point of objection we demonstrated to the Committee that the applicant had gone to great expense employing a private environmental consultant who lectures at Sheffield University and is considered to be an expert in this field who addressed this concern in his report submitted with the application. Natural England believed that this proposed jetty would lead to a; “reduction in the area of suitable intertidal habitat within the SSSI available for feeding and loafing waterfowl”. With the aid of the specialists report we were able to get the  Committee “All aboard” convincing them  that the small reduction in the area (i.e. footprint of the jetty – 28m2) represents a minute fraction of the whole harbour resource available, and the increased level of disturbance associated with a new jetty is minimal when compared to existing levels of recreational activity in this particular part of the SSSI (windsurfing, kite-surfing etc). The Committee concluded that the proposed jetty would have minimal significance and negligible impact on the ecological integrity of the SSSI, its habitats and bird species concerned and the application was approved. Our client was ecstatic on hearing the news, commenting “thank you for all your hard work “buoys”.”

If you have a nautical planning problem and would like a firm of planning consultants with the “flare” to achieve a planning consent for your scheme then contact Matt, Dan or Neil in confidence on 01202 585524 or email us at info@puretownplanning.co.uk for a free no obligation planning consultation.