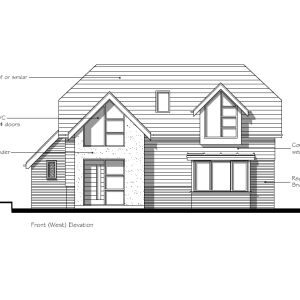 Dorset Council (former Purbeck area): Matt Annen, a director of the firm has recently secured planning permission to sever an existing plot and erect a detached dwelling with it’s own, separate access and parking. The site is within the settlement boundary of Upton and currently consists of a detached bungalow with a large rear garden.

The proposed dwelling which was designed by local firm LMA Architects was a detached two-storey property with three bedrooms. The design utilises dormer windows and hipped gable ends to achieve a chalet bungalow style. The proposed dwelling has private amenity space in the form of a garden that wraps around the front and both sides of the property as well as a private driveway for two cars.

During the process neighbours raised concerns regarding overdevelopment of the site and that it was out of character in the existing area. Our supporting Design, Access and Planning Statement had already anticipated that this could potentially be raised as a concern and provided a robust justfication which the demonstrated that the density of the proposed dwelling on the site, including the amount of allocated amenity space is very similar to the adjacent properties. It was also pointed out that Upton is a town as designated in the Purbeck Local Plan Part 1 and is characterised mainly by medium/high density residential housing. Whilst the immediately surrounding area is characterised by predominantly bungalows, many have been extended in a similar manner (using hipped gable ends and dormer windows) to create additional habitable accommodation at the first floor level. The officer concluded that the dwelling was visually consistent with existing nearby properties and did not consider that the proposed dwelling would constitute overdevelopment or be out of character in this suburban area.

If you have a possible development plot or a large garden that either on it’s own or in combination with neighbouring gardens may have potential for residential development then why not give us a call, to find out how if we can #makeithappen for you too.