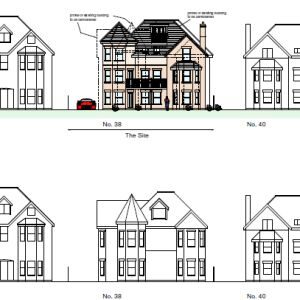 BCP Council (Bournemouth):  Matt Annen is delighted to share the news that outline planning permission has recently been granted for a new scheme of 8 flats in Boscombe Spa. But boy was it hard work!

The scheme followed a previously refused scheme by another agent. Despite reducing the number of units from 9 previously to 8 under this current application, the appointed planning officer was negative from the outset:

First it was contended that “the loss of the existing building has not
been adequately justified” which stemmed from the conservation officer who classed the building as a ‘non-designated heritage asset’, until it was pointed out that the application does not seek permission for demolition. This is because we had already secured consent for the building’s demolition under a previous Prior Approval process. So we made the case that our client will implement the demolition under that permission. So we had to urge the planning officer to agree that the loss of the existing building under this application really should be given little weight.

Then we had resistance on the basis of the Boscombe and Pokesdown Neighbourhood plan where BAP6 required the sensitive redevelopment of sites with developments to include 50% 3-bed units or larger, 40% 2-bed units and 10% 1-bed units. It was repeatedly argued that as there was currently 12 x 1 bedroom flats/bedsits on the site all well below minimum space standards – this was again a material planning consideration for the decision maker. The development proposed an improved mix of 1, 2 and 3
bedroom flats and thus whilst does not meet the exact split (a one bed needed to be a three bed to be as close a match as possible, but even then the percentages don’t actually neatly split when you have 8 flats!) this revised design accords within the spirit of the policy and represented a planning gain over the existing situation in terms of introducing a more balanced community of varying flat sizes.

The planning officer again reluctantly concluded; “All things considered, and with the proposal to provide significantly improved accommodation, it is considered that the harm caused through the loss of this building would be outweighed by the benefits in this particular instance. Overall, the proposal is therefore adjudged to be acceptable and in accordance with planning policy with only a slight conflict in respect of the Neighbourhood Plan identified.“

Regular readers of our posts will know that the tone of this write up is somewhat different to the usual ‘rosy’ and positive articles we typically share. But we feel the seemingly persistent negativity by officers, lack of communication and generally abysmal service (not by all officers, but most) needs to be aired. Although anyone with a current application in with BCP Council at the moment will more than likely know this already.

This is just one example of where PTP worked tirelessly (it really was draining at times) to deliver a planning permission for our client in the face of a barrage of negativity from Council planners. But we perservered. If you have a complex planning proposal or a scheme with a negative planning history and are loooking for a firm with a proven track record for delivering permissions on particularly tricky sites, then get in touch with Pure Town Planning to find out how we might be able to help you.