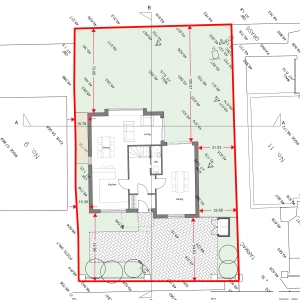 Havant Borough Council: Jess Glover is excited to announce that planning permission was unanimously approved at planning committee for the erection of a detached 3-bedroom dwelling at Queen Anne’s Drive in Havant.

Previously, back in 2017 we submitted an application for the demolition of the existing dwelling and erection of 2.no 4 bedroom dwellings on the site, however during the process of the application it was raised that a sewer pipe ran beneath the site and therefore the site layout would need to be amended to ensure a 3 metre proximity from the pipe. There were also concerns with regard to potential overlooking and amenity of neighbours.

Since the previous scheme we worked closely with DOT Architecture to prepare a scheme which overcame the previous concerns while reflecting the character of the area and safeguarding neighbouring amenity through a sensitive fenestration design and internal layout.

Within our supporting design, access and planning statement we put forward a robust justification that the proposal was an appropriate design response to the site’s context and this form of development would not in itself give rise to demonstrable harm upon the surrounding character and appearance of the area or neighbouring residents.

Upon considering the application and supporting documents the Planning Officer agreed with our conclusions and recommended the scheme for approval, however the scheme was “red-carded” by a local Ward Councillor. Jess provided a robust deputation at planning committee and the scheme was unanimously approved by committee members with very little debate. Our client was delighted with the decision, which will deliver an excellent family dwelling in a sustainable location.

If you have a parcel of land and would like to pursue a residential development then why not call Pure Town Planning on 01202 585524 or email info@puretownplanning.co.uk for a FREE 30 minute consultation on how we can help you.