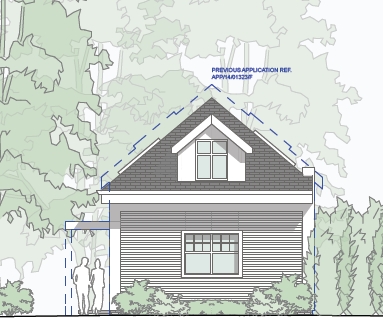 Borough of Poole: Pure Town Planning are pleased to announce following 18 months hard work they have secured approval to erect a new dwelling within the Branksome Park Conservation Area with plans supplied by Empery and Co.

This odyssey started in April 2014 with our client approaching us seeking to regularise an unlawful use, as his garage had been used as an office (Use Class B1(a)) without planning permission for over ten years. Following a comprehensive application, we demonstrated the continuous ten year period and a Certificate of Lawfulness was subsequently issued.

Following this successful application, we were instructed to submit an application through the Prior Approval Application for a permitted development change of use from B1(a) Office to Residential (Use Class C3) which was granted prior approval in August 2014. With the change of use undertaken this meant that the former garage had now become an independent house in the space of six months!

While the converted garage was perfectly habitable, our client wanted to maximise the potential and an application to demolish the existing dwelling and erection of a replacement dwelling was produced and submitted. Unfortunately, the good luck ran out with the application being refused by the Borough of Poole due to the design of the scheme including the size, height, active frontage, site layout and the close proximity to the street and side boundary. Following this refusal, we extensively liaised with the client and architect to determine which would be the best way to progress. It was decided that a pre-application enquiry should be submitted for the demolition of the existing dwelling and the erection of a replacement dwelling, which addressed the reasons for refusal from the previous application. The Council concluded that the suggested amendments to the size, scale and design would make the scheme acceptable in this location and welcomed a revised application.

Once the revised application had been submitted, we quickly got to work showing the Case Officer that we had comprehensively overcome the reasons for refusal on the previous application, which she agreed and said that she would be recommending the application for approval.

However, due to the close proximity of trees to the proposal the Tree Officer had outstanding concerns about the potential harm to the trees. Following an extensive site meeting with the Officer, a redesign of the fenestration arrangements, a revised Arboricultural Method Statement and a Construction Method Statement his outstanding concerns were withdrawn as he was satisfied that this proposal would not lead to any harm to the site.

Finally, 18 months after the first application, we had secured planning permission to demolish the existing dwelling and erect a replacement dwelling in its place. What these four applications on this one site show is the range and depth of both our technical understanding of the planning system and the ability to negotiate to a successful conclusion to ensure that our client gets the approval.

Therefore, if you have any sites big or small and are looking for a company with a proven record of success why not get in contact with Pure Town Planning at info@puretownplanning.co.uk or 01202 585524 for a confidential FREE 30 minute consultation to see what can do for you.