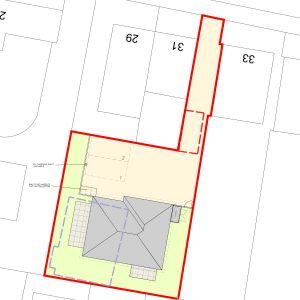 A previous scheme for this site and thee neighbouring site was refused back in 2007 and subsequently allowed on appeal in 2008. The Planning Inspector concluded:
‘The proposed bungalows would be of modest dimensions and although plots would not be generous, they would both have some external amenity area. Generally, the dwellings in this area are not large and do not have spacious plots. In the local context, the 2 buildings in this secluded backland area would not in my view appear cramped and would not be harmful to the character and appearance of the area; there would be no conflict with Policy’

The application was approved roughly in line with the 8 week target date.