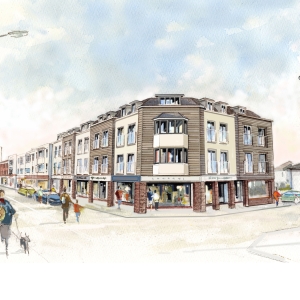 Bournemouth Borough Council: Pure Town Planning are pleased to announce their recent consent for the demolition of the existing building and the erection of one built form containing 23 flats and 4 retail units at 318 through 324 Holdenhurst Road, Bournemouth in collaboration with Harriplan.

The existing site consists of one large single storey structure, which is sub-divided into three units arranged as a used car shop, a tyre shop and a general autocentre providing MOTs, services and repairs. As is often the case for a building of this nature, it makes a negative contribution to the Holdenhurst Road street scene.

The approved scheme consists of the four retail units situated on the ground floor and the 23 flats set out over the first, second and third floor. The existing parking area found on the southern boundary would be retained serving the parking requirements for both the flats and retail units.

To avoid concerns of overlooking and overbearing upon the dwellings immediately to the south on Victoria Place and Springbourne Mews, the bulk and massing of the proposal was carefully considered. This included ensuring the distance between the respective built forms was in line with the distance set out by design guidance and obscurely glazed windows on this side elevation.

This purposeful design choice meant that while the ground floor could occupy a similar footprint to the existing built form, the remaining of the built form was drawn in and away from the southern boundary. This allowed the creation of a large communal garden area on the first floor, ensuring that there could be no concerns.

During the course of the application, Bournemouth Borough Council considered some of the existing units to be in a B Class Use and required further justification on the loss of these “employment” units. Pure Town Planning quickly responded noting that it is not an area appropriate for such units, saved planning policies from the Bournemouth District Wide Local Plan encouraged the redevelopment of plots in local centres and that the proposed development would have a significant improvement upon the street scene.

The application was subsequently approved with only minimal changes required to the built form, much to the delight of the client.

If you have a large brownfield site and would like to pursue a mixed-use development then why not call Pure Town Planning on 01202 585524 or email info@puretownplanning.co.uk for a FREE 30 minute confidential consultation on how we can help you.