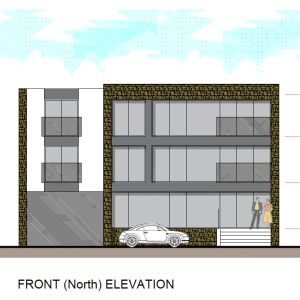 BCP Council (Poole):  Darryl Howells, a director of the firm is immensely pleased to announce the receipt of planning permission for the demolition of a dwelling and the erection of a 3-storey building consisting of offices on the ground floor and eight self-contained flats above with car parking to the frontage and rear.  The scheme was designed by Simon Morgan of Morgan Design Studio.  The decision is the final chapter on a long history of planning applications which has been extremely frustrating for the client and caused considerable cost and delay, preventing this site coming forward for development.

The site is occupied by a detached 2 storey building that was formerly the Ferryman public house.  The use of the public house has long ceased and become a dwellinghouse however the Council had previously identified it as a non-designated heritage asset (NDHA) for its architectural and social interest.  The site is also been designated as employment land in the Local Plan and within flood zones 2/3 where housing development can only be permitted in special circumstances.

The client first sought the redevelopment of the site back in 2016 however due to concerns over the loss of a NDHA, the replacement building’s design, impact to amenities of existing and future occupiers, and inappropriate use of employment land, the Local Planning Authority (LPA) refused several planning applications before he instructed Darryl to become involved. On Darryl’s advice the client secured planning permission for the demolition of the NDHA using Part 11 of the General Permitted Development Order that allows for the demolition of a building unless it is in a conservation area or is a designated Listed Building.  The designation of a NDHA did not trigger either scenario so the LPA granted its demolition.

Darryl then advised the client to apply for planning permission and allow him to argue against the LPA’s previous reasons for refusal but this time with the approval of demolition as part of the arsenal to the used as a material planning consideration.  Regrettably the LPA still resisted the application and refused on the grounds of loss of the NDHA, poor design, harm to residential amenity and highway implications.   Darryl appealed the decision and won all of the arguments except that loss of the NDHA.  The Inspector accepted that it could be demolished but felt the appellant had not demonstrated that it was not viable to retain the existing building.

So finally this planning application was submitted, with additional details and evidence obtained from a builder and estate agency that the works to retain the dwelling was not viable and that the resale values would be to low due to the position of the dwelling in the Port, close to commercial uses.  The planning officer conceded that the evidence presented justified the loss of the dwelling however then that officer left the employment of the Council, and we were reallocated a new planning officer who felt that the design of the building was not of sufficient quality to justify the loss of the NDHA (despite the Inspector ruling otherwise).  So, Darryl engaged with the new planning officer to amend the exterior of the building to improve its quality.   The officer was pro-active and came forward with ideas of how to improve the design and increase the materials palette to be used.  The amendments were finally agreed, and the scheme granted planning permission under the officer’s delegated powers.   The decision draws a line under the numerous attempts to redevelop the site which had taken 5 years to achieve.

Darryl would express his thanks to the Senior Planning Officer who assisted him to improve the exterior appearance of the building which will enhance the context of the site which includes a dull 1980’s flatted scheme, port related commercial buildings and a manufacturing depot of boats.  The conclusion of the debate was the officer’s commentary that “Overall this case is finely balanced. However, it is considered that the justification provided surrounding the condition and refurbishment costs, along with the design solution when taken in combination with the considerations surrounding the efficient use of brownfield land and the tilted balance are sufficient to justify the loss of the locally listed building and tips the application in favour of approval”.

Here at Pure Town Planning , our consultants will go above and beyond to try to obtain planning permission for our clients and irrespective of the history of a site or the LPA’s repeat refusal of applications, there is usually a way to resolve the concerns to secure the positive outcome.  If you have a site that is proving challenging to obtain planning permission or you want a fresh opinion of how to deliver the site, then please contact one of our consultants for a fee appraisal and advice.