South Downs National Park Authority: Pure Town Planning are very pleased to have secured full planning consent for one of our most interesting (and long running) projects. The proposal is a unique project to convert part of a Victorian covered reservoir into a new self-build family home for our clients. 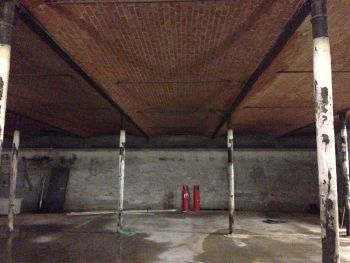 The reservoir is a fantastic structure with a roof formed of shallow brick barrel vaults supported on iron columns. The top is grassed over and to complicate matters has been designated a SINC (Sites of Importance for Nature Conservation) on account of being an example lowland calcareous grassland.

Being a prominent hill-top location in open countryside within the national park – with views for miles around – the visual impact of the proposal was key. In particular there was potential for light pollution to the surrounding areas. The solution was to remove part of the roof to create a central sunken courtyard in the middle of the reservoir. The house will be built around the courtyard with windows to all rooms looking out into it. In order to otherwise preserve the structure of the reservoir intact the proposal is to create a stand-alone structure underground with its own roof, floor and walls detached from the reservoir.

The application largely went smoothly with the numerous complicated issues having been largely ironed out in the long pre-application and lead-in process. The main sticking point turned out to be affordable housing. The local policy required the proposed 3-bedroom dwelling to contribute over £50,000 towards affordable housing. Having to pay this upfront before starting work would completely stall the project for our self-building clients. But the Council would not waive it because they said the eventual value of the dwelling would mean the development proposal as a whole would make enough money to cover it – never mind that our clients had no intention of selling their unique dwelling at the end. The deadlock was eventually broken by the Court of Appeal ruling which resulted in the Government reinstating the 10-unit affordable threshold. The Council (Winchester City Council acting for South Downs National Park Authority) agreed to abide by this policy and thus agreed that this single dwelling should not have to contribute.

This case illustrates how the presence of a structure with conversion potential, even in the most sensitive of locations, can sometimes open up the possibility for gaining a house in a place where a new-build dwelling would never be accepted.

If you are considering a self-build proposal no matter how grand or modest, then why not contact Pure Town Planning for advice on whether it might be feasible to obtain planning permission.