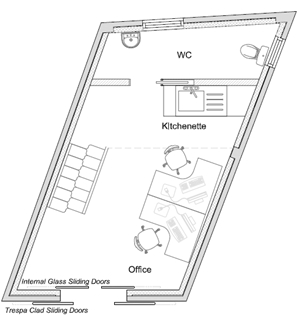 Bournemouth Borough Council: Pure Town Planning are pleased to announce their latest approval in Southbourne to demolish the existing garage and erect a home office on its footprint with a mezzanine level for office storage. The plans accompanying the application were designed and drawn by Design and Development Associates.

Our client approached us wanting to create an office space at home – to allow them to work from home a couple of days a week. They wanted to demolish their existing garage, which was in poor condition, and build their proposal on the footprint.

As part of our planning strategy, we recommended that the proposed office space be built to a size which would usually be allowed under permitted development rights. This ensured that the scale, bulk and mass of the proposal cannot be considered harmful to neighbouring properties.

With Highways now on board, there was a last minute request from the Case Officer to change the roof form to a hipped roof! Not one to compromise without a fight, we argued that a hipped roof design on this office would make it appear bulky and squat when compared to the proposed front and rear white rendered gable. Further to this, we noted that a hipped roof would mean the essential office space on the mezzanine level would be lost too. Fortunately, the Case Officer agreed with our opinion on the roof design and recommended the application for approval.

So if you are looking at a garden office project for your own house why not give us Pure Town Planning a call on 01202 585524 or email info@puretownplanning.co.uk for a FREE 30 minute consultation.