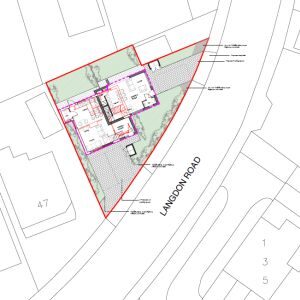 BCP Council (Poole):  Matt Annen, a director of the firm is pleased to have secured secured planning permission for a pair of semi-detached dwellings on a site in Lower Parkstone which were designed by local firm Dot Architecture.

Our client initially came to us having received a refusal on the site for a pair of semi-detached dwellings. The Council had refused the scheme on grounds of the 2 dwellings on this site constituting over-development and thus being out character with the area and also that the garden areas would be unsatisfactory in size.

We challenged this decision at appeal and whilst the appeal was dismissed, it was only dismissed on grounds of lack of an appropriate contribution towards Heathland mitigation (as our client’s bank refused to sign a S106 and the Inspector did not accept the Council’s adopted S111 approach to delivering contributions). The Inspector disagreed with the Council’s reasons for refusal concerning over-development and the small garden sizes, stating:

In response to the Council’s view that the recreational amenity spaces of each dwelling were found to be unsatisfactory in size, particularly due to their depth, and shading due to the northerly position of the rear gardens, the Inspector concluded:

Off the back of this appeal decision an identical scheme was resubmitted and a S111 Agreement completed by the applicants, which was duly accepted by Council and the application was approved. Whilst the Council probably still didn’t agree with the scheme, because the appeal decision formed a material planning consideration the Council they could not reasonably refuse, much to our client’s delight.

So if you have a site, which has just received a refusal or perhaps has an extensive negative planning history and you are looking for a firm of Chartered Town Planners to give it a look with a fresh set of eyes and one with a never give up attitude why not give Pure Town Planning a call on 01202 585524 or email info@puretownplanning.co.uk and see how we could help.