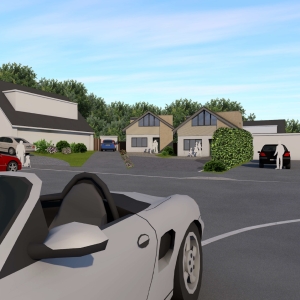 Borough of Poole: Pure Town Planning are thrilled with our latest planning permission for the demolition of an existing bungalow and the erection of two detached dwellings with associated access and parking in South Western Crescent, near Whitecliff in Poole.

The application site comprises an existing large bungalow set within a spacious corner plot. The site had a previously dismissed appeal for two dwellings, 18 years ago. The Inspector’s report stated that the development would appear cramped, especially with garages to the front of the dwellings, pitched roof front dormers were not deemed characterful of the area, and the proximity of the houses to the boundaries and overlooking would harm neighbouring amenity.

Local property developers; Bayview Developments took on the site as they felt that 18 years on, policy had changed, the area had evolved with recent developments being built out and the demand for houses in this area was very strong. Pure Town Planning were appointed as were local architects Trinity Architecture and together we devised a scheme which would successfully address the previous Inspectors’ concerns. The new scheme removed the garages to the front of the dwellings and the proposed dwellings were designed with a simple gable fronted pitched roof form, finished in render with buff brick sections to reflect the properties to the south and the area’s surrounding character. Flat roofed dormers were also incorporated into the design which are very prevalent in this area. New boundary treatments were proposed and no primary windows were shown on first floor side elevations to protect neighbouring amenity. The built form of the northern most property was set off the northern boundary further than the previous scheme, the dwellings themselves were lower in height being a true chalet as opposed to more of a two storey built form (as previous) and the ridges now run front to back instead of side to side. We felt all of these small individual changes combined to successfully overcome the concerns raised previously and resulted in a scheme which delivered two new family houses which sat comfortably on the site and with it’s neighbours.

Upon considering the application and supporting documents, the Borough of Poole planning officer agreed with our conclusions and moved to recommend the scheme for approval. The scheme was GRANTED under delegated powers earlier this week.

If you have a parcel of land or a property with a tarnished planning history and would like to pursue a residential development, then why not call Pure Town Planning on 01202 585524 or email info@puretownplanning.co.uk for a FREE 30-minute consultation, to find out if we can help you too.