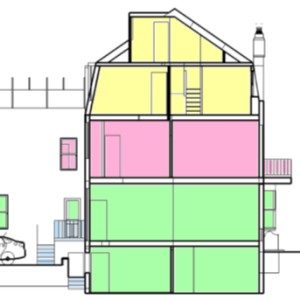 Dorset Council (former Purbeck area): Jess Glover is delighted to announce that she has recently secured planning permission for the conversion of the existing dwelling into 3no. self-contained flats with associated access and parking at The Parade in Swanage.

The site is within the Swanage Conservation Area and in a Flood Zone and therefore required a detailed Design, Access, Planning and Heritage Statement prepared by ourselves, and a Flood Risk Assessment, which was prepared by Frank Tyhurst. These documents justified to the Council that the proposal would not harm the character and appearance of the conservation area nor would it create unsafe living conditions for future occupants.

The scheme also sought to upgrade the façade of the building so that it would have a more attractive visual appearance than the existing, altering the fenestration and replacing the existing upvc windows on the front elevation with larger paned windows.

As some will be aware, Purbeck are in the latter stages of a Local Plan Review and are proposing a new policy to restrict second homes (Policy H14). In March 2020, the Examiner’s Post Hearing Notes were published which found that with some modification Policy H14 was justified. Namely, that the second home policy should not be attached to existing dwellings. After some deliberation with the planning officer she decided not to attach the second home restriction to the flats as the scheme would involve the sub-division of an existing dwelling.

After negotiations with the planning officer and the Environment Agency, it was agreed that the proposal was acceptable and the approval was subsequently issued.

Here at Pure Town Planning, we are always looking to get our next approval. If you are interested in a comprehensive redevelopment of your existing house and are looking for town planners to put together a strong submission package in order to give your proposal the best chance of receiving planning permission first time, then why not give us a call or send us an email info@puretownplanning.co.uk as we would be delighted to assist you too.