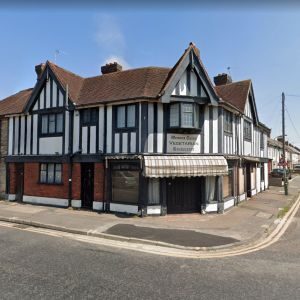 BCP Council (Bournemouth):   Matt Annen has secured planning permission for the conversion of an existing building near Boscombe town centre into four residential units with no car parking.

The site lies close to the Sovereign Centre. The building itself is currently a restaurant which is not in use and in a poor state of repair, such that it would benefit from redevelopment. Due to the town centre location which provides a variety of restaurants in the area, the loss of this particular restaurant was considered acceptable by the planning officer and not harm the viability and vitality of the area.

When the application was initially submitted in August 2020, a principle objection was raised by the highways officer due to the lack of parking, which was contrary to the then existing Bournemouth Parking SPD, adopted July 2014. A revised Bournemouth Parking SPD was adopted in January 2021 which confirmed the site was located within Zone B of the new Parking SPD and where zero-parking requirement was acceptable for 1- and 2-bedroom flats for a scheme such as this. Accordingly, the application was then deemed acceptable in car parking terms.

Sometimes when planning policies change, it can turn an unacceptable scheme to an acceptable one overnight (as was the case with the adoption of the new parking SPD in this instance). If you have received a refusal in the past and would like to see if the policy framework covering your site has changed to your advantage, then please contact one of the Pure Town Planning consultants and we’d be happy to carry out a Free Of Charge, confidential planning appraisal.