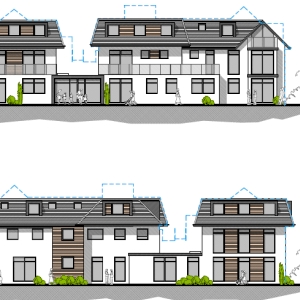 BCP Council (Bournemouth):  Darryl Howells, a director of Pure Town Planning is pleased to announce another successful working collaboration with ARC Architects, to secure planning permission for the alterations and conversion of a former Southbourne care home into 16 flats with additional car parking, bin and cycle store.

Prior to this application, the previous application for the conversion was refused by Bournemouth Borough Council on the grounds that the scheme would harm the character and appearance of the area by creating a building that was unsympathetic to the predominant scale and design of the street scene; create excessive frontage car parking; harm the amenities of the occupiers and neighbours by reason of overlooking; and fail to provide intended residents with adequate bin/ cycle storage provision.

The client instructed Darryl to appeal the decision in 2019.  The appeal was dismissed however Darryl won many of the planning arguments that led to the principal reasons for the refusal.  The Inspector accepted Darryl’s argument that the reuse of the building met with sustainability objectives and the alterations to the exterior would positively contribute to the street scene, even if some loss of some traditional features occurred.  The wide expanse of hardstanding was determined part of the evolving character of the street scene, and the loss of landscaping would not be harmful to visual amenities.   The Inspector accepted Darryl’s additional arguments about design, layout, amenity space and most of the overlooking issues.

The Inspector dismissed the appeal on the bin provision and the relationship to an occupier’s window; and overlooking to a specific neighbouring property.

Upon receipt of the Inspector’s decision, the applicant re-instructed the architect and Darryl to amend the scheme to overcome the minor issues.  Darryl resubmitted the application (using the applicant’s free go) with a correspondence ‘reminding’ the LPA that the most of their previous arguments had not been upheld by the Inspector and the amended plans overcame the issues raised.

Amendments were required during the course of the application, but we recognise that the planning officer worked proactively with the architect and Darryl to secure the final result.  The scheme was tested for affordable housing but due to a robust viability report prepared by Tangent Chartered Surveyors, the DVS officer concluded zero affordable housing was due.

The planning officer determined the application under his delegated powers, and within the agreed timescale that was extended by several weeks, to enable the DVS officer to compete his assessment.

If you have received refusal of a planning permission do not just give up.  Contact one of the Pure Town Planning consultants for a free, no obligation assessment of the arguments that can be made at appeal, which in turn could lead to the appeal being allowed or a subsequent application approved.

Approved: use of dwelling as Use Class C4 HMO in Bournemouth

BCP Council (Bournemouth area): Chris Miell is pleased to a[...]