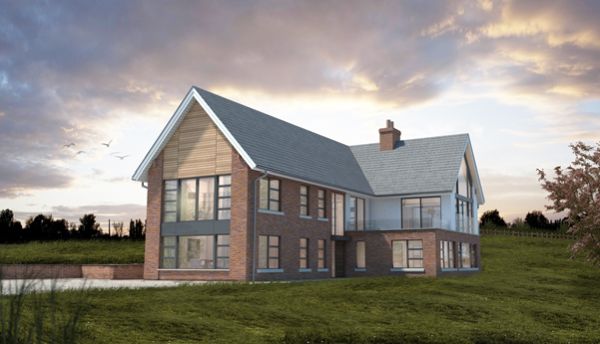 Harborough District Council: Pure Town Planning are thrilled to announce that we have recently secured planning permission for a stunning contemporary replacement dwelling designed by Tony Holt Design in the Leicestershire countryside.

Before the grant of planning permission, the site was the subject of two previous applications for replacement dwellings. Both applications were refused by the LPA and dismissed at appeal by the Planning Inspectorate.

The appeal process was handled by ourselves in late 2015 and the Inspector considered both refused applications under a dual appeal. Both appeals were unfortunately dismissed in February by the Inspector who had concerns that the proposed form of the respective developments would harm the sensitive rural character of the area.

Notwithstanding the negative appeal decisions the Inspector concurred with many aspects of our expert written representations and accepted that the principle of erecting a contemporary replacement dwelling at the site was acceptable. He inferred in his report that a revised scheme comparable in floor area to the latter refused application could be acceptable if a revised design approach could be secured.

Following the appeal, we met with the client and their architect to advise on a planning strategy that took the Inspector’s comments on board whilst delivering a level of development that accorded with the client’s brief. Following extensive discussion we advised that a revised design which took influence from the traditional L-shape form whilst featuring a contemporary finish would have the highest chance of success as a robust argument could be formed to show that the development safeguarded the rural character of the surrounding countryside.

Given the site history, prior to submission we entered into pre-application discussions with the LPA with a view of achieving a mutually acceptable development. Following 3 rounds of pre-app we submitted the revised application which was accompanied by a thorough supporting design, access, and planning statement that made clear the development overcame the Inspector’s and LPA’s previous concerns.

Upon considering the application and supporting documents, the Council agreed with our conclusions and moved to grant planning permission for the development. The client was overjoyed with the decision and stated “We are extremely pleased with the positive outcome. We would like to sincerely thank you for doing such a great job. You were highly professional and were able to craft a good working relationship with the LPA that helped considerably. We felt that your correspondence was always well measured and set an excellent tone. We also appreciated your frank advice. So often, it is difficult to find someone who is willing to “come off of the fence”

If you are looking to remodel or redevelop an existing dwelling then why not call Pure Town Planning on 01202 585524 or email info@puretownplanning.co.uk for a FREE 30 minute consultation on how we can help you.