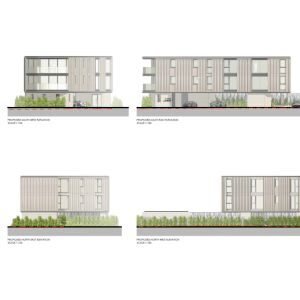 BCP Council (Christchurch): After a lengthy process consisting of a couple of applications, multiple revisions and two different planning officers, Matt is pleased to have finally secured planning permission for a contemporary flatted building in Christchurch. The scheme was designed by local firm Anders Roberts Cheer for mutual clients.

This site originally housed an office building which had previously gained consent for conversion to 46 flats with parking to the front. The site was within a Zone C location within the BCP Parking Standards SPD (as the former offices were part of a retail park), and based on the size of the proposed flats, one car parking space for each flat was required, given all the parking on site had been allocated to the 46 flats previously approved, there were no parking spaces left for the proposed scheme. Therefore, the scheme itself had a shortfall of parking of 4 spaces, based on the requirements within the BCP Parking Standards

In weighing up the planning balance, the officer noted, that directly adjacent the site boarders Parking Zone B in which no parking would be required for a similar flatted development. As such, in setting out optimum standards the SPD indicates the general expectation for levels of parking but does allow for some flexibility. Where an applicant can provide justification, it could be appropriate to depart from the standards. Relevant factors might include the location of the development and where there is greater public transport accessibility such as high frequency bus routes. There was a bus stop directly outside of the site and a further 12 bus stops within a short walk from the site (approx. 5 mins). The site is also located directly adjacent the retail park and as such the future occupiers would have access to necessities within close convenience. Consideration was also given to the fact that future occupiers of the four flats would be aware of the parking arrangements prior to occupant and therefore ease of the Parking Standards SPD is considered appropriate in this instance. With tilted balance in mind, it was considered that the shortfall of 4 parking spaces within the site, due to the sustainable location, would not result in a level of harm to highway safety which would warrant refusal in this instance.

If you have a development site which you feel has not maximised the it’s potential, why not contact us at Pure Town Planning on 01202 585524 or email info@puretownplanning.co.uk for a confidential planning appraisal.