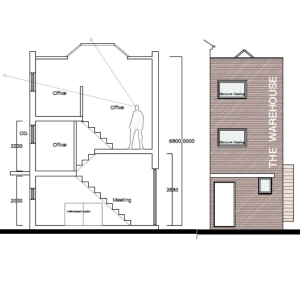 BCP Council (Bournemouth area): Jess Glover is pleased to announce that she has recently secured planning permission for alterations and the change of use of a storage building (D2 use) to office use (B1 use) at Windham Road in Bournemouth, in collaboration with DOT Architecture.

The existing site consists of a vacant two storey extension at the rear of the former British Legion Club which was used for storage. However, the British Legion building was redeveloped into residential flats in 2015 and the application site was left redundant.

The site has a lengthy planning history with three previous applications for residential development refused on the site due to amenity issues. As such, in order to secure a viable use of the vacant site we applied for planning permission for an office use which was considered acceptable by the LPA.

The development is laid out over three floors and the proposal is based on the principles of Japanese design which seeks to make the most of available space and natural light. The internal layout maximises the available floor space and provides a high standard of accommodation. The development has no ‘dead space’ and there are no corridors or solid internal partitions. Instead, internal walls are replaced with passive timber partitions.

To avoid concerns during the course of the application regarding overlooking to the adjacent dwellings, windows on the front elevation were obscurely glazed. The application was subsequently approved, much to the delight of the client. The case officer concluded that the development would be in accordance with the Development Plan, would not materially harm the character or appearance of the area or the amenities of neighbouring and proposed occupiers and would be acceptable in terms of traffic safety and convenience.

If you have a brownfield site which you consider could provide a more efficient use, then why not call Pure Town Planning on 01202 585524 or email info@puretownplanning.co.uk for a FREE 30 minute confidential consultation on how we can help you.