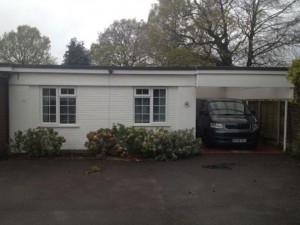 Borough of Poole: This case is typical of one where Pure Town Planning really comes into its own – not huge, not glamorous but still we put in the time and effort to get that approval. A client recently complained to us of a problem he was having with the enforcement team at the Borough of Poole over the use of an annexe building attached to the rear of his house. We were told that this annexe building (nicknamed “the Cottage”) had actually been used as a self-contained dwelling for many years. But as the previous owner refused to admit it, demonstrating that this had gone on for longer than the four years necessary for it to be deemed lawful under planning law was proving difficult.

We advised against going down the certificate of lawful development route to secure this annexe as a separate self-contained residential dwelling, which may have proved impossible with the previous owner’s denial, and could have led to further enforcement action. Instead Pure Town Planning suggested taking the bull by the horns and simply making a retrospective planning application.  We advised that as the building was already there (and had approval to be there) and the physical sub-division had already taken place it was simply a question of whether the council would agree to 2 units instead of 1 unit on this plot. Given the historic use of the cottage building where was the harm with this we thought?

Well it seemed the appointed planning case officer at the council took a different viewpoint and we were informed with 2 weeks to go that it was likely to be refused because it did not respect the “local distinctiveness” of the area.

Once again this caused Matt to spring in to action and ‘terrier-like’ he convinced the case officer that he could prepare a justification document which would persuade the Council that the proposal would comply with this policy and would leave the case officer no choice but to approve the application…. and that is precisely what happened. A watertight argument was produced which the planning officer realised would certainly win the day if it came to planning appeal. Planning was approved on the target date with no pre-commencement conditions attached. Our client is now free to let the dwelling on the open market.

If you would like to explore the development potential of your property, why not give us a call and pick our brains.