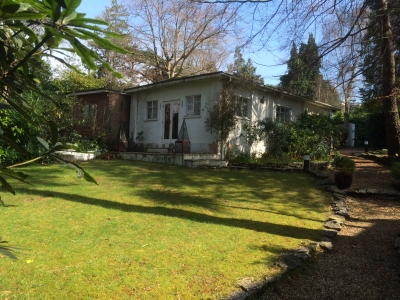 Borough of Poole: Pure Town Planning have recently secured a certificate of lawfulness confirming the lawful use of a former garage in Branksome Park is a B1(a) office.

The large, detached former garage was originally approved in 1961 and built soon after. It served a large residential house in Branksome Park, Poole. The area is characterised by large spacious plots and is within the Branksome Park Conservation Area. Over the past 20 years a number of different businesses have operated out of the building and the owner approached Pure Town Planning requesting that we regularise the current situation and formalise consent for the building to be used as an office.

We set to work researching the history of the garage property. We established that the building had actually been converted to office accommodation in 1994 and the work took approximately 6 weeks. We managed to track down the builder who carried out the conversion works and this was confirmed by a sworn Statutory Declaration from him. We collated evidence in the form of photographs and a further 5 sworn Statutory Declarations from the owner of the premises, staff who confirmed they had worked in the building and clients of the businesses who confirmed they had attended meetings in the former garage building.

The comprehensive planning package which Pure Town Planning submitted to Borough of Poole clearly demonstrated throughout a continuous period of at least 10 years the use of the garage was a B1(a) office . The Council deemed that the evidence provided suitably satisfied them that on the balance of probabilities, the former garage building had been in use as an office for at least a period of 10 years (it was actually closer to 20 years, but we only needed to prove 10).  Subsequently a Certificate of Lawful Use was issued confirming “The building has been used as an Office under Use Class B1 a of The Town and Country Planning (Use Classes) Order 1987 (as amended) for more than 10 years and as such is lawful”.

If you have recently found yourself in a similar position or are looking to regularise an existing unlawful use, then why not get in touch  and take advantage of our FREE completely confidential half hour consultation.