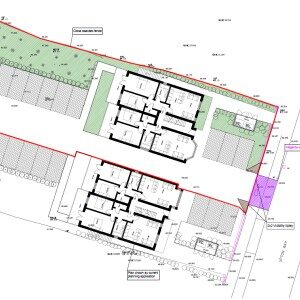 BCP Council (Poole): Darryl Howells has secured full planning permission for the demolition of the existing dwelling and the erection of a part 2 storey / part 3 storey block of 6 flats with car parking positioned to the frontage and rear of the building.  The plans were drawn by Darren Henderson of DOT Architecture however the client instructed Darryl to prepare the planning justification, submit it and handle the application to its successful conclusion.

Darryl’s instruction came after he successfully secured planning permission for another block of flats on the adjacent(garage) site.  In this second application, Darryl served notice on the land owner, as the scheme sought to use the vehicular access that had been previously approved.  Using that access meant that only one vehicular access was needed to serve two developments, and therefore in doing so represented improved highway safety and an efficient use of the site.

Darryl successfully argued that the scheme was compliant with adopted planning policies, including that of the Neighbourhood Plan which sought 1-2 dwellings in this location.  The scheme was approved at Planning Committee without objection.

The consequential effect of the decisions is that Darryl has now secured planning permissions that total 12 flats on a site that was originally occupied by a single dwelling.  If you have a development site and you want to maximise its development potential, then speak to one of our planning consultants to give that advice.