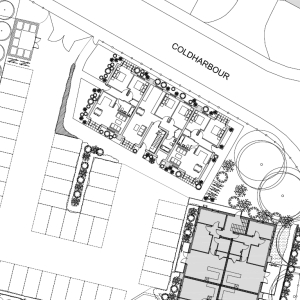 Dorset Council:  Darryl Howells has secured a planning permission to erect a block of 9 flats with vehicular access and parking for a site in Sherborne.  The plans drawn by LMA Architects offered the provision of nine 2-bedroom units on land, originally designated for employment purposes in the Council’s Local Plan.

The background to the scheme was a Prior Approval application for the conversion of the former offices (phase 1) on employment land, previous secured by Darryl.  As he got the architect to draw the red line identifying the whole site, essentially the use of the land became residential rather than part employment. Doing so led the way to the recently approved block of new flats (phase 2) on a different part of the site, despite adopted planning policies stating residential use would be inappropriate.

The result of Darryl’s involvement has essentially taken a vacant office building on designated employment land, converted it to 24 flats and with this approval for a new detached building of 9 flats, provided the client with a total of 33 flats in total with no affordable housing.

If you have a vacant building on designated employment land, it may not necessarily prevent you from obtaining a residential use. Why not contact Pure Town Planning to find out if there are residential prospects for your site?