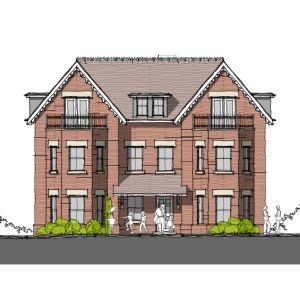 BCP Council (Poole):  Matt Annen is pleased to have secured full planning permission for the demolition of an existing building and erection of a block of 12 flats in Poole for clients; Amirez Ltd and which was designed by ARC Architecture

This road in Poole was identified as being in an area where flatted development is encouraged in principle subject to the impact upon the character and appearance of the area, neighbouring amenities, car parking and highway improvements and relative heights to buildings.  Using his extensive knowledge of planning arguments, Matt was able to argue with relative ease that the design, appearance and height  of the buildings were compatible with the evolving street and the site’s accessibility to local shops and public transport supported the principle of flats.

The appointed planning officer concluded in her report that the proposal, (by virtue of its scale, massing, footprint, height, position in relation to neighbouring buildings and landscaping, plot coverage and parking provision)
would be in keeping with other buildings in the area and the established pattern of development in the road. She also confirmed that neighbouring amenity and privacy would be preserved. It was also accepted that the scheme would not be sufficiently profitable to be able to provide an affordable housing contribution. Whilst off the back of this there was an 11th hour concern raised over the deliverability of the scheme, Matt was able to swiftly and robustly combat the objections with support from Simon Corp and S106 Affordable Housing to nip this issue in the bud.

The application process took just over 5 months, which considering it fell under a “Major” application process and the District Valuer (who have a severe backlog) had to be consulted, the timeframe wasn’t too bad in the general scheme of things. Many current planning applications with BCP Council are experiencing appalling delays due to a lack of staff and resources at the present time.

If you have a property and would like to explore how to maximise the development potential, then please contact one the consultants from Pure Town Planning.