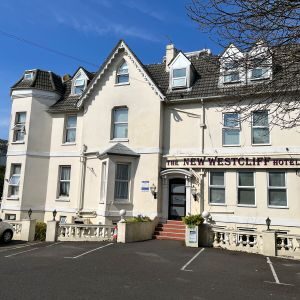 BCP Council (Bournemouth): This week Matt Annen was very happy to receive outline planning permission to demolish an existing hotel building and erect a 5-storey block of 22 flats (arranged as 18 residential and 4 holiday flats) in the West Cliff area of Bournemouth. The scheme was expertly designed by DMW Architects.

The key issues which arose during the course of this application process was the impact on character and appearance of the conservation area, including the loss of the building, and the impact on the tourism function of the area.

Where a development proposal will lead to less than substantial harm to the significance of a designated heritage asset, this harm should be weighed against the public benefits of the proposal including, where appropriate, securing its optimum viable use.

Pure Town Planning provided a robust justification as to why the existing building could not be retained and converted and we demonstrated that the redevelopment of a new sympathetic built form would enhance the character and appearance of the conservation area. The benefits of the scheme were weighed up by the officer in his planning balance.

Following liaison and negotiation with the appointed planning, conservation and urban design officers the scheme underwent a number of revisions to address issues raised. Externally, the revisions include the addition of more traditional arched window headers, the use of facing brickwork on the main facades, the the provision of smaller, more traditional dormer windows, additional tile hung gable feature on the south elevation, introduction of a characteristic entrance canopy, and an increase in the pitch of the hipped roof. Internally, a better mix unit sizes was provided. The outcome was that the planning officer deemed that the traditional design and finish, and the positive revisions that were made during the process were considered to constitute a suitable replacement building, which would not have any harmful impact on the character or appearance of the conservation area.

During the planning process we also met with the tourism officer on site to discuss the difficulties that the existing hotel building faced. Whilst the scheme to replace the existing 37 bed space hotel provision with a new development of 4 x 3 bed holiday flats (equating to 24 bed spaces) resulted in a net loss of 13 bed spaces, when the tourism officer assessed the net loss of bed spaces against the Tourism SPD he concluded that the proposals met the tests set out by the Tourism SPD.

Matters which were approved under this outline consent were; Access, Appearance, Layout, and Scale, leaving only the Landscaping arrangements to be agreed at the Reserved Matters stage.

If you own/run/have control over a hotel business and would like to explore whether there would be residential development potential then contact Pure Town Planning on 01202 585524 or email info@puretownplanning.co.uk for an honest and confidential planning appraisal.