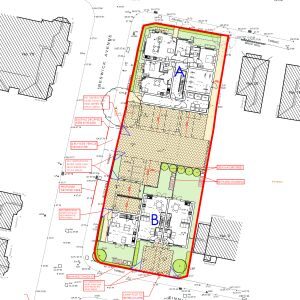 BCP Council (Bournemouth): Matt Annen is delighted to share the news that full planning permission has been granted to demolish 3 existing buildings and erect two blocks comprising 10 flats and 3 houses with parking in Ensbury Park.

The scheme took exactly 8 months from submission to determination which in the current climate of extensive Council delays was actually not too bad! This scheme was designed by ARC Architecture whose support was fantastic with a scheme which evolved notably throughout the planning process: During consideration following significant initial resistance from the planning officer, significant revisions were made to the scheme being amended from two blocks totalling 17 flats to two blocks consisting of 10 flats and 3 houses. We also teamed up with S106 Affordable Housing once again who expertly justified a zero affordable housing financial contribution on site which was accepted by the District Valuer.

In making his final positive recommendation the planning officer concluded:

If you have a site which may have potential for a major residential redevelopment which you would like us to assess, please contact us at Pure Town Planning on 01202 585524 or email info@puretownplanning.co.uk for a confidential planning appraisal.